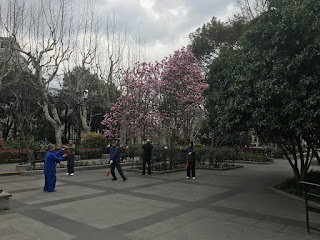 Tai Chi master Gin Soon Chu passed away on March 18th, 2019. He was a disciple of Yang Sau Chung, who was the oldest son of the famous Yang Cheng Fu.

Gin Soon Chu first started learning Tai Chi from Lai Hok Soon in Hong Kong in 1956. After his first teacher’s death in 1964, he then began training with Yang Sau Chung, who was also teaching in Hong Kong. Gin Soon Chu moved to the United States in 1968 and opened the Gin Soon Tai Chi Club in Boston, Massachusetts in 1969 where he taught the traditional Yang style of Tai Chi Chuan for 50 years.

Gin Soon Chu taught the Yang style of Tai Chi to many students in Boston, and from across the world, with many of those students who are now teaching the art to others.

Our deepest condolences go out to the family and friends of Gin Soon Chu, as well as his many students throughout the world. The funeral will be held at 11am on Monday, March 25th at the Wing Fook Funeral Home located at 13 Gerard Street in Boston.

More information about Gin Soon Chu and the Tai Chi school he founded in Boston can be seen at http://www.gstaichi.org